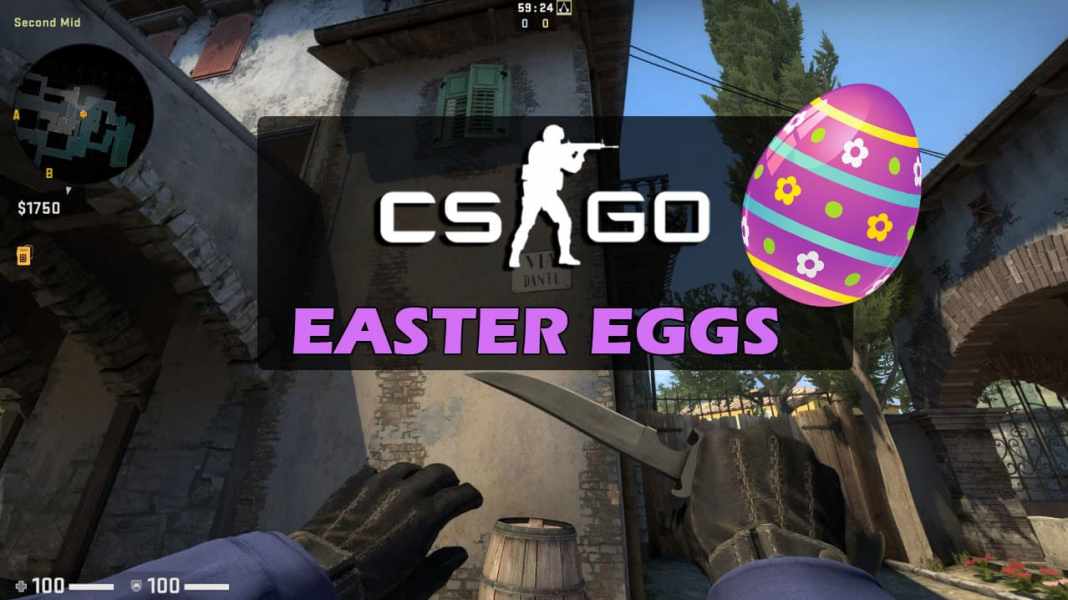 Easter Eggs in CS are major parts of any video game. Developers always try to convey hidden messages inside the gameplay to make it more attractive for gamers. Throughout the years the culture of embedding Easter Eggs in CS video games has flourished. Sometimes these eggs are very much under our noses, but in some cases, they are very hard to find.

Counter-Strike: Global Offensive is not an exception in this regard. The game enjoys huge popularity among games and it is one of the most popular types of esports where numerous competitions with decent prize pools are held frequently. Developers of Valve have introduced some of the Easter Eggs in CS which we will overview in this article.

Dust 2 map is probably the most known map among the gamers of Counter-Strike. This map provides a wide variety of tactics. At the A Site, there is a very interesting graffiti with the text of “Goose”. This text refers to Minh Le, who is a very famous developer. His nickname is Gooseman and alongside Jess Cliffe, he was the main figure who had a pivotal role in creating Half-Life, the game which completely changed the video game industry we know today.

It is a very interesting point that considering the fact CS: GO is a part of esports, betting companies have gradually started offering bets on this game. One of the most notable things best CS:GO bets in 2020 offered to gamers was finding Easter Eggs in CS the game, which provided additional money. This trend was particularly visible in Russia, the country, where Counter-Strike is like a religion for gamers. They have one of the strongest players in the world and teams that are formidable for the opponents. Russian gamers have also discovered some of the most interesting Easter eggs in the game.

There is a very interesting map in CS: GO called Overpass, where at the B Site you can notice one up text. If you do not know there is a famous group of graffiti makers in Germany called OneUnitedPower, which sprays graffiti in various places. They even recorded videos of their vandalism and at the same time, the map is based on a canal overpass set in Berlin. So it is indeed a very interesting text.

The main protagonist of the Half-Life series Gordon Freeman is widely believed to be one of the best characters in video games. We mentioned Dust 2 above while talking about Gooseman, but there are other texts as well at this location which are written in the Persian language. In the place where the terrorists spawn there is a text written in this language which is literally translated as “Freeman was here”. And this text is directly oriented towards Gordon Freeman, the slayer of monsters.

We have already said that tournaments are held frequently in CS: GO. During overtime of The Grand Final of ESL Cologne 2015, members of the Fnatic team decided to purchase 4 AWP-s and together they peaked mid doors. The victim from the opponent team decided to peek from the other side of the mid doors but was killed instantly by the squad. The members of Fnatic then continued with their plan and decided on the outcome of the game. Because of that at the terrorists’ spawn place, a graffiti of firing squad is depicted.

The final easter egg is also about a tournament. The same Fnatic was playing against LDLC in the DreamHack Winter 2014 Quarter-Finals. The match was complete domination of LDLC but Fnatic made an incredible comeback. The match caused controversy amid the reason that Fnatic was able to see through all due to texture transparency. They managed to make a comeback. However there was a lengthy discussion after the match about its fairness, and the decision was to replay the match from the score of 12-3. Eventually, LDLC went to the semi-finals.

The boost position on Overpass was quickly patched after and a sign was embedded on the wall saying “Geländer übersteigen verboten” which is a German word for  “Climbing over railings is prohibited”. This sign is a reminder of that game.

Finding Easter Eggs in CS is challenging for gamers but it is pleasurable when you discover them throughout the game. It sometimes needs a lot of attention, but in many cases, they could be just in front of our eyes.

Escape Room: Entertainment or Training for the Brain?

Yo Gotti Net Worth: How much money does this American Rapper have?

Android Auto Not Working: How to reconnect it? True-and-tried solutions to...

somna kapoor - January 3, 2022 0
Driving sometimes can be loaded with boredom. Especially, you are on a long-distance journey all by yourself. However, in this digital era, each Android...

Effective customer support – how to take care of it?

How to Monetize Your Videos Without Social Media

What is Plotter? Definition, Types, Functions, and Mechanics explained!

Real Debrid Device – How to activate it? Find out everything about Real Debrid here